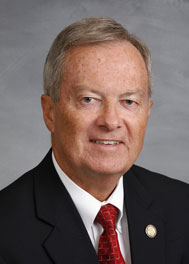 The announcement by the NCAA and ACC that they will punish North Carolina by withholding championship games demonstrates the hypocrisy of these arrogant organizations. They are not applying the same logic to over 20 other states with similar laws which are participating in a lawsuit against the Obama dictate on this subject.  There is also no logic in their decision, because nothing changed in NC law since they made their original decision to come here.  It is based entirely on public relations and pressure from supporters of Roy Cooper and Mayor Roberts.

This is a constitutional issue.  The NC constitution says that the state creates towns and counties.  Then the state delegates certain duties, such as zoning.  Charlotte had no constitutional right to tell businesses and school districts what to do on these issues, and had to be reminded by the General Assembly.  Then candidate Cooper and his campaign supporters got to work to hurt North Carolina and blame it on Gov McCrory.  The only poetic justice is that it is hurting Charlotte more than any other city.  Mayor Roberts justly deserves the “credit” for this mess she created, and the politicians of her mindset have blown out of proportion for their own gain.
Roy Cooper and groups supporting him on these issues are actively looking for money and votes to further hurt North Carolina.  The only way they will succeed is if good people don’t get off the couch and out of the pew and express their outrage toward these tactics by Mr. Cooper and Ms. Roberts.
Rep. Frank Iler
NC General Assembly
District 17 – Brunswick County
Posted in Press Releases & Statements